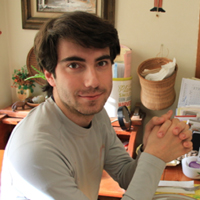 Alex Ozdemir is intensely curious about understanding how things work.  Perhaps this curiosity is what drove him to pursue a self-designed major in “Computational, Mathematical, and Physical Theory” at Harvey Mudd College.  After completing two summer internships in industry, Alex decided to try research.  He began seeking research opportunities around campus. He remembered enjoying the algorithms that he’d studied in an introductory Computational Biology class, so he reached out to the professor, Dr. Ran Libeskind-Hadas, who happily agreed to supervise Alex on a research project.

Alex worked on the problem of “reconciling” pairs of evolutionary trees.  For example, when two species (e.g., flowers and the bees that pollinate them) evolve in tandem — each exerting selection pressure on the other —  their evolutionary trees are often similar but not identical.  The objective of the reconciliation problem is to map one tree onto the other in order to best explain their differences.  Fortunately, the notion of “best” is well-defined and there are efficient algorithms for computing a best reconciliation;  unfortunately, there can be a very large number of different equally good reconciliations.  Alex’s goal was to a find polynomial time algorithm for clustering the potentially exponentially large space of equally good reconciliations.  He worked with a classmate to find an algorithm to do this, proved the algorithm correct, analyzed its efficiency, and implemented it.  Ultimately, this led to a collaboration with even more students, resulting in a jointly authored paper that Alex presented at the 2017 International Conference on Algorithms for Computational Biology in Portugal.

Throughout his time as an undergraduate, Alex got involved in a number of research projects, including work one summer on programming languages with Professor Stephen Chong at Harvard University.  In time, Alex began to craft his own research questions. Alex noted, “Sun Tzu allegedly wrote ‘Victorious warriors win first and then go to war, while defeated warriors go to war first and then seek to win.’ I think research is similar, deciding which problem to tackle is as important as tackling it, just as choosing your fights is as important as fighting them. If you only participate in half of the process, you’re missing out.”

“I remember sketching early ideas for the (computational biology) algorithm while we were sitting on the floor of my room next to my whiteboard,” Alex says.  “I remember hammering out the details of the proof while we were sitting around a table in the student center. I remember sitting in East Dorm lounge over fall break; we were experimenting with different tensor representations and their effect on the algorithm’s runtime. These locations were commonplace for us — places we lived in, hung out in, and did homework in. I really liked this because it kept me close to the problem.”

This year, he is working as a math and computer science teacher at a private high school in New England and he will be starting the PhD program at Stanford in the fall.  Reflecting on his research experiences, Alex says that he enjoys the process by which hazy intuitions are explored, take form, and are finally refined into precise solutions.  He strongly believes that his research experiences as an undergraduate helped convince him that he would enjoy a career in research.

Alex encourages other undergraduate students to consider doing research, and even to treat their coursework as much like a research exploration as possible. He says that “research is about tackling challenging problems that no one knows the answer to, and if you pretend that no one else knows how to do your homework, then you’re halfway there.”

– Written and edited by Keith Feldman and Booma S Balasubramani

Texas to Tokyo: A Path to Graduate School Scroll to top