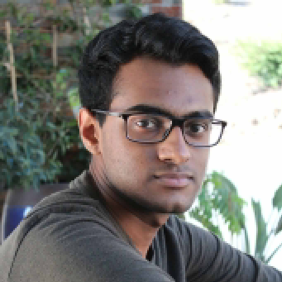 Being a curious high school student, Siddharth was part of the Robotics Team at Gunn High School, which compelled him to study Electrical Engineering and Computer Science at UC Berkeley. However, after getting introduced to Natural Language Processing, and being an avid reader, Sidd realized that he wanted to pursue both his interests – Computer Science and Literature together, and transferred to Brown University soon after his freshman year. Sidd is currently a senior at Brown, dual-concentrating in both Computer Science and the Literary Arts.

Sidd has always wanted to be a professor, and thus decided to pursue research as an undergraduate. Sidd’s research is primarily in the field of natural language processing, with an emphasis on human-robot interaction.  Shortly after arriving at Brown, Sidd emailed Prof. Eugene Charniak, who teaches a class on computational linguistics. Sensing his enthusiasm, Prof. Charniak invited Sidd into his research group, where he gained exposure to several research areas and was given the opportunity to pursue his own research interests with constructive feedback from the rest of his research group. Sidd also got acquainted with Prof. Stefanie Tellex when he took her course on Grounded Language for Robotics. In that course, Sidd met Dilip Arumugam, a fellow undergraduate student with whom he collaborated on various projects for the next two years, leading to several publications.

Sidd has since participated in a number of projects in Prof. Tellex’s lab.  An early project sought to provide robots with the ability to process instructions of varying complexities (e.g., from low-level instructions like ‘go north three steps’, to high level instructions like ‘take the cup of coffee to the living room’).  Currently, Sidd collaborates with students and postdocs in Prof. Tellex’s robotics lab to build intelligent agents that can act and communicate effectively through language. He has developed a neural network model capable of mapping language to reward functions (goal conditions) using an Abstract Markov Decision Process that allow the robot to construct a trajectory to satisfy a task. Sidd already has several publications to his credit ranging from a journal paper to publications at various conferences and workshops including a paper that won the Best Paper Award at RoboNLP 2017.

Talking about his favorite aspects of performing research, Sidd says he enjoys solving problems with a group of driven people and loves being able to take a brand-new problem, and come up with novel creative solutions. He advises fellow undergraduate students looking to get into research to not be afraid to reach out to professors with interests similar to theirs. “You will never know where it could lead!” he says.

Sidd strongly believes that his research experience definitely reinforced his lifelong desire to become a professor – which, he says, is definitely what he wants to be doing for the rest of his life. Furthermore, he states that – “Research helped me hone in on exactly the field, and the types of problems I want to work on – I really like this idea of building agents that can act and communicate, and I have so many exciting ideas for different ways to go next.” This year, Sidd is a resident at Facebook AI Research, working on problems in language grounding with his mentors including Prof. Rob Fergus, Dhruv Batra, and Jason Weston. He is looking forward to starting his PhD at Stanford University next year, where he plans to study Natural Language Processing.

Programming and Paradigms, a Lifelong Pursuit of Research

Playing with Meshes Scroll to top