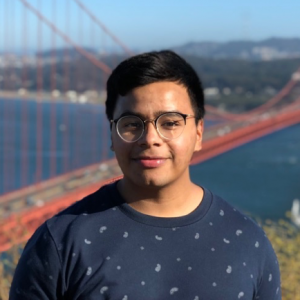 As a first-generation, low-income, Latino college student, Andy Rosales-Elias defies the standard image of a computer science researcher. At a two-week science and math program preceding his first year at UC Santa Barbara, Andy recalls: “I remember one night hearing a cohort member talking on the phone to his parent, who was a professor at another university, about his research problem, and I couldn’t help but think that I was somehow inferior and had a huge disadvantage in terms of pre-existing knowledge and resources.”

While that program introduced Andy to the fields of image recognition and machine learning, it was ultimately his resident advisors, themselves successful undergraduate researchers, who inspired Andy to continue down the research path. Through EUREKA (Early Undergraduate Research and Knowledge Acquisition), Andy found sponsorship for the summer before his sophomore year with Professors Chandra Krintz and Rich Wolski at RACELab, The Lab for Research on Adaptive Computing Environments. It was there that he began working with Nevena Golubovic, his graduate student mentor, on the problem of wildlife monitoring at the Sedgwick Reserve, a research wildlife reserve located northeast of the UC Santa Barbara campus.

At the Sedgwick Reserve, motion-sensor “camera traps” have captured millions of photos of various animals.  Originally tasked with detecting temperature values in these images, Andy quickly progressed to using image recognition techniques to automatically classify animal types within the photos. His work, continuing throughout his sophomore year, forms a key component of RACELab’s “Where’s The Bear” (WTB) project: an end-to-end, distributed, Internet of Things (IoT) system for wildlife monitoring. A video of the project can be found at http://www.news.ucsb.edu/2018/018702/wheres-bear.

Through this work, Andy not only learned critical technical, collaboration, and public speaking skills, but more importantly, he found that he too could be a face of computer science research, despite feeling out of place just a few years prior. Hoping to inspire other individuals from traditionally underrepresented groups, Andy has taken leadership roles in several organizations with missions dedicated to increasing diversity in computer science (and science and math more broadly), including Code2040, the Society of Professional Hispanic Engineers, and the Society for Advancement of Chicanos/Hispanics and Native Americans in Science (SACNAS). Andy reflects, “I believe that through mentorship and guidance, I can inspire others that were in the same position as I was years ago, just like my mentors inspired me in my early years of undergraduate.”

Andy is currently finishing up a summer internship at Lyft, where he is applying the skills he gained through research on their Machine Learning Platform team. He will graduate from UCSB this December.

– Written and edited by Robert Bowen and Joslenne Pena

From a Reading Group to a Research Group