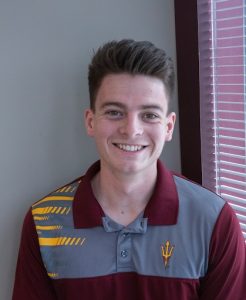 Joseph Briones wants to help robots work together more effectively. While double majoring in Computer Science and Math at Arizona State University (ASU), Joseph has worked towards extending the theory of programmable matter for applications in swarm robotics and multi-agent robot systems. His undergraduate research revolved around the 3D Amoebot model for self-organizing particle systems, a 3D programmable matter simulator. His work also resulted in two publications to the 2018 and 2019 International Symposium on Self-Stabilizing Systems. Currently, he is a computer science PhD student at his alma mater, furthering the research he started as an undergraduate.

When he first arrived at ASU, Joseph was curious about computer science and medicine but was not sure what he wanted to do with them. As a result, he took what he calls a “breadth-first approach” to his education, exploring interesting opportunities to see where they would lead. This approach led him to his first research experience in a microbiology lab. While he did not find a passion for microbiology, he found a passion for conducting scientific research and working on complex problems. Since then, research has played a pivotal role in his undergraduate career, ultimately leading him to his current research in algorithms for programmable matter.

Joseph’s path to algorithms research started in his sophomore year. After completing an introductory algorithms course, he developed an interest in theoretical computer science. Through cold emails to professors, he eventually joined Professor Andrea Richa’s Self-Organizing Particle Systems lab after having worked as her teaching assistant.

Having familiarized himself with the relevant literature and code, Joseph and Prof. Richa decided on a project to extend the underlying theory to programmable matter in three-dimensions. Programmable matter is matter that can change its physical properties based on user input or autonomous sensing, and is composed of simple, programmable particles that achieve complex, collective behaviors. A better algorithmic understanding of programmable matter can advance swarm robotics and multi-agent robot systems. While those fields have come a long way, they still lack a rigorous algorithmic framework to evoke collective behaviors from micro-level interactions between robots.

Through the National Science Foundation’s Research Experiences for Undergraduates (NSF REU) program, Joseph contributed to work on the theoretical framework for the 3D Amoebot model and the software development of a 3D programmable matter simulator. For these projects, he collaborated closely with his graduate student mentor Joshua Daymude and his undergraduate mentee Ziad Abdelkarim. He also worked with Prof. Rida Bazzi to develop the mechanics and proofs for a 2D self-organizing particle system leader election algorithm. This research with Dr. Bazzi has been disseminated over two consecutive years at the International Symposium on Self-Stabilizing Systems.

Joseph credits Dr. Richa’s unique and enriching lab environment as his favorite part of research: “Not only is the lab very talented, it is also a lot of fun.” As a lab, they have a “distributed” lecture series, where each lab member presents a topic of interest from a specific theme. He also loves interacting with different scholars visiting ASU and their lab. Lastly, he enjoys his lab’s domestic and international collaborations with the University of Paderborn in Germany, Georgia Tech, MIT, and Northwestern University.

His undergraduate research career came with the inspiration and support of his parents. His father immigrated from Nicaragua to America alone as a teenager, having to repeat senior year of high school to learn English. Through a strong work ethic and perseverance, his father eventually earned a scholarship to attend college in Arizona. “He taught me that you can overcome problems and life circumstances with hard work and perseverance.”

For students looking to get involved in research, Joseph recommends starting by reading about the subject, first with survey papers to get contextual knowledge and then more recent papers to gain a deeper understanding. Next, he suggests reaching out, either through instructions on lab websites or a well-written, thoughtful cold email. “Although they may not have the bandwidth to respond or take on another student, don’t take this personally. Keep trying, eventually someone will get back to you with an opportunity or a recommendation on how to get involved. Don’t be afraid to try things, make mistakes and push yourself out of your comfort zone.”

Here for Good: Cancer Detection, Community Service, and Beyond