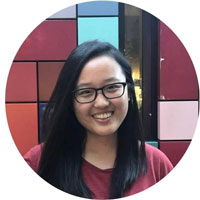 While Gloria Kim’s interest in computing started in the classroom, her curiosity in deeper questions and desire to learn quickly took her outside of any curriculum. While taking an Introduction to Parallel Programming course with Prof. Vivek Sarkar at Rice University, Gloria found the topics led her to questions that fell outside the scope of the class. Rather than leave those questions unanswered, Gloria decided to take the initiative, asking Prof. Sarkar to join his lab as an undergraduate researcher in the summer following her sophomore year. In her research outside of the classroom, Gloria says she found even more enjoyment in learning for learning’s sake. “The entire process is driven by curiosity – question after question, as opposed to the contents of a syllabus.”

In addition to Prof. Sarkar’s mentorship, Gloria was also quickly paired up with a research scientist, Dr. Akihiro Hayashi, and set to work with him on a project at the “intersection of parallel computing and machine learning”. In particular this project was built on the notion that, while many of the world’s largest supercomputers use several different types of processors to increase performance over that of commodity hardware, the decision of which application or mathematical kernel to run on which processor remains an open problem. Such a decision requires an in-depth understanding of both the application and the hardware. Rather than rely on the judgement of programmers, Gloria aimed to create an automated solution. Using a machine learning-based approach, she “taught” computers to make this decision for themselves. Through the training and use of binary prediction models, Gloria’s research demonstrated that given sufficient information about the system, computers can learn to make optimal scheduling decisions 99.66% of the time. To complete this project, Gloria had to teach herself about techniques in machine learning, about different statistical methods for drawing relationships, about heterogeneous computing, and about a wide range of other topics.

When asked if she had any advice for other undergraduate students considering doing research, Gloria emphasized the need to find a professor to work with who cares about the learning experience in addition to the research. Gloria notes that: “although my mentor and professor were always there to provide support and guidance, they ultimately allowed me to make the project my own.”

Although Gloria originally intended for her research to be a summer activity, she decided to continue her project through the following year, and is now weighing the possibility of graduate school in her future even while working as a software engineer at Optimizely. Gloria has received high praise from both of her advisors, says Dr. Hayashi: “Gloria is a hard worker. I like working with her!”. She has already presented this work at the Rice Undergraduate Research Symposium, and she, Dr. Hayashi, and Prof. Sarkar are planning on submitting a research paper.

– Written and edited by Keith Feldman and Max Grossman

From Passions to Projects: How interest in design and art led to computing...

Beyond the Valley Scroll to top