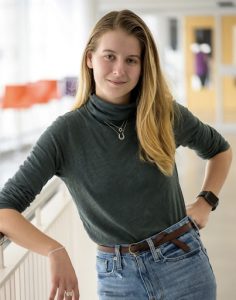 Curious about summer opportunities in computer science, Courtney Miller learned about Research Experiences for Undergraduates (REUs) in her first year at the New College of Florida. Having assisted in clinical trials in high school, she was eager to give research in computer science a try. “I really enjoyed that experience, so I figured it couldn’t hurt to try out academic research.”

After her professor showed her the National Science Foundation (NSF) website listing all the computer science REUs, Courtney scrolled through the list and applied to the opportunities that caught her eye. She ultimately joined the REU for Software Engineering (REUSE) program at the Institute for Software Research (ISR) at Carnegie Mellon University. At the start of her REU, her advisor gave her some suggestions for summer research projects and let her decide what she wanted to work on. “I really appreciate this because I was given enough support to not feel like I was on my own, but at the same time, I felt I had autonomy over what I ultimately worked on.”

Courtney decided to study open source software contributors with a focus on core contributors. Core contributors manage, organize, and sustain projects in free/libre and open source software (FLOSS). Due to their outsized roles, core contributors can devastate a project if they decide to disengage. She wanted to explore why core contributors disengage, such as occupational transitions. Her research culminated in an REU end-of-summer poster titled, “May The FLOSS Be With You: Examining Factors Relating to Developer Disengagement”. She also published a paper in the 2019 International Conference on Open Source Systems (OSS 2019) called “Why Do People Give Up FLOSSing? A Study of Contributor Disengagement in Open Source.” At OSS 2019, she enjoyed a perk of computing research — conference travel. “I got to go to Montreal to give a talk and present the work, which was super fun!” 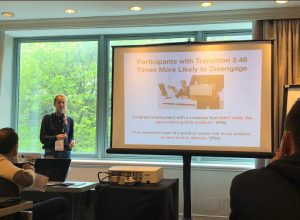 Not only was her research engaging, but also her work environment at the ISR was very supportive and collaborative. She enjoyed brainstorming ideas with other researchers and learning about all the exciting work her peers were doing. She was surrounded by welcoming and helpful researchers, inspiring her to pursue academic research as a career. Although not every day was perfect, she found her calling in research. “I sincerely appreciate the fact that fundamentally my job is exploring something I find cool. As my interests grow and evolve, so does my research.”

Outside of research, she also founded the New College of Florida ACM student chapter (the ACM of NCF) and led the organization for three years. She was motivated to start the ACM of NCF because of negative experiences with AP Computer Science in high school; her teacher made her feel out of place because of her lack of prior computing experience. “We’ve worked as a team to build a department where people interested in computer science are encouraged to explore and are supported by a social and present community.”

For students interested in research, Courtney recommends starting with REUs or reaching out to a trusted professor. She also recalls being intimidated to “fail” when she first started in research.  She later learned that as long as she ethically performed responsible, reproducible research, there was no such thing as failure. “Negative results can be just as important as positive ones for creating a road map of a given research area. It’s all just exploring fascinating questions and expanding human knowledge.”

— Written and edited by Jean Salac

Demystifying Robot Plans, Discovering Her Own Scroll to top