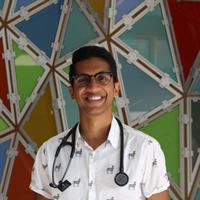 The field of medicine prides itself on being evidence-based, but where does that evidence come from? With aspirations for a career in medicine, this was one of the questions that fascinated Vinyas Harish, which would eventually lead him on a path from the engineering lab to the operating room.

Although Vinyas’s research career began as an undergraduate at Queen’s University, his interest in understanding how science and engineering could be applied to medicine began much earlier. As a high school student, Vinyas attended a research open house where he met Dr. Gabor Fichtinger, whose students were demonstrating an open-source system for ultrasound-guided lumbar puncture. He recalls that after seeing what the realm of transitional clinical engineering was like, he knew he had to get involved. Upon enrolling as an undergraduate at Queen’s, Vinyas joined Dr. Fichtinger in the Laboratory for Percutaneous Surgery (PERK), where he would work during the summers after his first three years and the academic terms over his junior and senior year.

In a truly transitional approach, the research problems addressed as part of the PERK lab came directly from clinicians who would highlight problems faced as part of their practice. With the vast array of research undertaken at PERK, the projects explored by Vinyas were based on a combination of his personal interest, experience, and skill set. Over the course of three years, he worked to develop open-source applications in the fields of surgical oncology, cardiology, and medical education. These included a training study for anesthesiology and emergency medicine residents to develop skills in conducting image-guided central line catheterization, and the co‑development of a software application to train anesthesiology residents in ultrasound‑guided needle interventions.

The projects were highly collaborative, and outside of his direct advisor, Vinyas worked closely with other faculty members in the lab including Dr. Tamas Ungi and Dr. Andras Lasso, as well as a cadre of professional engineers, clinicians, medical residents, graduate students, and fellow undergraduates. He recalled feeling the lab environment was “truly like a big family.” Vinyas’s research has resulted in a number of publications and presentations, in venues such as SPIE Medical Imaging and the International Congress & Exhibition of Computer Assisted Radiology and Surgery.

Discussing his experience as a researcher, Vinyas notes how he enjoyed contributing to open source platforms used around the world (3D Slicer and SlicerIGT). He also commented on the excitement of getting to watch the tools on which he worked tested–one time, he watched them in action in an operating room during a computer-navigated lumpectomy. When asked if he had any advice for other students looking to get into research, Vinyas discussed the importance of finding meaning in your work. Understanding that research can be frustrating and difficult, he highlighted the need to find something you are motivated to work on. For him, he found that the software he was tasked with creating had meaningful clinical motivation from the beginning of development.

Outside of the research itself, Vinyas credits his decision to participate in undergraduate research with a number of other opportunities. These include the opportunity to mentor a local high school student as he designed a low‑cost training platform for ultrasound-guided pericardiocentesis–his mentee competed the project and was named a finalist in the Canada-Wide Science Fair. In an effort to accelerate his professional development, Vinyas also acted as the outreach coordinator for his lab and volunteered at the hospital with which the PERK lab works.

Reflecting on his time in the PERK lab, Vinyas believes that research experiences have provided him with an important perspective as he moves forward in his career. He learned that that the role of a clinician-scientist is to facilitate end-to-end research, citing that “they are bridge-builders who ensure that academic centers are not ivory towers, isolated from the potential to impact patients.”

Vinyas is currently in his first year of an MD/Ph.D. program at the University of Toronto. He is interested in pursuing his Ph.D. in Clinical Epidemiology within the Institute of Health Policy, Management, and Evaluation, where he hopes to examine the application of artificial intelligence to problems in global health. At the University of Toronto, Vinyas is looking forward to gaining the training required to lead clinically-translatable research and working to “connect patients with the discoveries and innovations that they need most.”

From Internet Searches to International Conferences Scroll to top