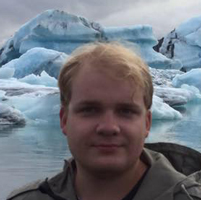 Originally a pre-med student at Loyola University, Laurynas Kalesinskas had envisioned his undergraduate degree as a stepping-stone to attend medical school. An interest in research and a passion to create change in healthcare led him to computational research. Fascinated by the projects he worked on, Laurynas shifted his focus. Graduating with a Bioinformatics and Biology double major and minors in Computer Science and Biostatistics, he decided to apply to Ph.D. programs, and he is currently a first year Ph.D. student in Biomedical Informatics at Stanford University.

The primary focus of Laurynas’s research was project KScope, a machine-learning tool used to quickly and accurately classify genes to a function. He acted as the principal designer and developer, working throughout the academic year and over summers and breaks. Today, KScope is in its last stages of development, and Laurynas is currently working on his final amendments to the project, with his team intending to submit a paper on the project. Alongside KScope, Laurynas has also furthered his expertise by working on various other software tools for analyzing and visualizing sequence data, a number of which have been published and presented as papers and posters at conferences.

Laurynas also had the opportunity to work in his group’s wet lab which enabled him to learn more about biology and understand where data for the project comes from. Talking about his favorite aspects of research, he remarks that he enjoys using research as a tool to learn in an applied fashion, noting that “As problems came up on the way to my goal, it was my job to come up with solutions to these problems. I was able to use methods I learnt in class, and modify them to use as solutions to real-life research problems.”

Laurynas strongly believes that his undergraduate research prepared him to apply and interview for, and eventually accept, a position in his Ph.D. program, saying that he feels his experience has “set him up for success in graduate school.” When asked if he had any advice for fellow students interested in research, Laurynas suggested they reach out to their professors to network, saying that professors enjoy talking about their research and are often excited to see students getting involved themselves. He also mentioned that professors can be wonderful mentors who can help students find opportunities in either academic or industry settings.

-Written and edited by Booma S Balasubramani and Keith Feldman