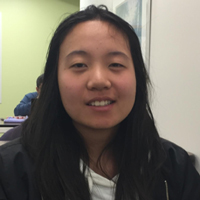 Xuan Huang graduated from Bryn Mawr College with an undergraduate degree in Computer Science, and is currently a PhD student at the University of Utah studying Computer Graphics.  A summer research internship influenced her decision to attend graduate school.

Studying at Bryn Mawr, a women’s college, made Xuan feel very comfortable to take up science and engineering and encouraged her to explore her interests with great freedom. In 2016, when she was in her sophomore year at Bryn Mawr, Xuan heard about a summer internship program with professors from the Computer Science Department at her college.  That summer, she worked with Prof. Dianna Xu on Computer Graphics and Computational Geometry.  The project was part of Prof. Xu’s research, and when Xuan was offered a choice to pick from a wide variety of topics, she chose to work on 2D mesh smoothing. Though the work didn’t yield immediate result, she continued working on it for the next several years, culminating in her senior thesis.

The goal of Xuan’s project is to efficiently improve the quality of a 2D mesh so as to make the later procedures that act on it such as animation and rendering to be faster and produce better visual results. She developed an efficient algorithm to smooth any 2D triangular mesh, which significantly reduced the probability of generating an ill-shaped element.

Apart from working with Prof. Xu, Xuan has also worked with Prof. Aline Normoyle at Swarthmore College on a procedural generated 3D scene using openFramework. Prof. Normoyle later introduced Xuan to a summer research opportunity under the guidance of her advisor Prof. Norm Badler at UPenn, with whom she worked on 3D eye region construction to reconstruct a “typical eye” under specified situations, for example – tired, disgusted or annoyed. Xuan finds the academic circle to be quite small as Prof. Badler happened to be Prof. Xu’s advisor’s advisor, and she was not aware of this until she requested for a reference letter from Prof. Xu.

Talking about her favorite aspects of performing research, Xuan says she is inclined towards graphics, because she is able to tackle unknown problems and see the solution evolve visually. “In the end I am the only person who knows all the details in the problem, and it feels good to see and develop that project”, she notes. Xuan has given several presentations on her work as part of her internship, and the outcomes of the project were presented as a poster in the ACM SIGGRAPH student competition.

When asked for advice for other undergraduates looking to get into research, Xuan highlighted the importance of taking high level courses as early as possible. In Xuan’s experience, professors tend to be eager to talk to students about ongoing research in their labs. She encourages undergraduate students to talk to their professor in any course that intrigues them.“Most of the time they are very happy to help, or at least they point you to someone who knows more,”she suggests.

Xuan believes that her research experience definitely helped shape her decision about what to do after college. She feels lucky to have worked on three different research problems in her undergraduate years and is particularly happy about the opportunity to attend ACM SIGGRAPH, one of the largest conferences in Computer Graphics.  That experience helped her gain insights on  current trends in the field.

From a Reading Group to a Research Group Scroll to top