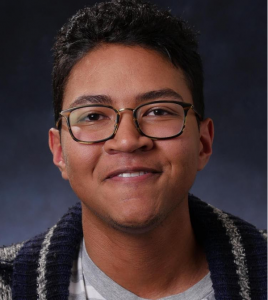 Christian “Chris” Hill wants to transform the way we sense the world around us. His interest in human augmentation and sensory extension research began early in his college experience. During his second semester at the University of Colorado, Boulder (CU Boulder), Chris took a new course on children’s education, human augmentation, and transhumanism taught by Mike Eisenberg, a professor in the Department of Computer Science and Institute of Cognitive Science.. Eisenberg invited Chris to join his Craft Tech Lab, where researchers blend computation and craft materials to enhance children’s craft activities. The lab’s interdisciplinary and artistic environment fueled his creativity, and Chris began designing, fabricating, and programming augmentation projects. “Everyday I am surrounded by materials and ideas that are atypical of what you would see in a typical computer science lab, motivating me to delve into different disciplines and stretch my definition of what ‘computer science’ research is.”

Chris worked on several sensory augmentation projects in the Craft Tech Lab, beginning with the Electronette, an arm-mounted device that contracts muscle groups by electrical stimulation to manipulate the wearer’s arm and fingers. “With the Electronette, I wanted to allow for the user to customize finger movements with the goal of allowing the user to play instruments they’ve never encountered before, to give those with a paraplegic hand the ability to have pre-programmed finger calisthenics routines, learn different baseball pitching finger positions, as well as have the device be a tactile output device similar to vibration motors.” He also developed polymer-based artificial skin, a cat whisker sensory extension, and the ThreadBoard, a magnetic breadboard for prototyping electronic textile (e-textile) circuits.

Not content with simply designing the future, Chris is now applying his inventions to HCI and K-12 education research. In the “Debugging by Design” project, sponsored by the NSF STEM+Computing program, he is collaborating with researchers at the University of Pennsylvania and Utah State University to develop hardware and software tools for debugging e-textile circuits. High school students are tasked with designing their own debugging activities and materials supported by these tools, giving Chris and his colleagues a unique setting in which to study how debugging strengthens computational thinking and fosters a growth mindset. In the “Pet Project,” sponsored by the NSF Cyberlearning and Future Learning Technologies program, Chris is designing and implementing learning activities with trans-species sensation wearables such as his cat whisker sensory extension and an augmented reality headset that lets students see colors like a dog would. These innovative activities not only foster empathetically driven scientific inquiry but also introduce students to futuristic technologies. “Currently, technology is developed under the assumption that the user’s body is constant; human senses, basic cognition, limbs, and the nervous system follow a consistent evolutionary development,” Chris observes. “It is likely that we will need to reconsider this framework in the future as transhumanism technologies (implants, additional senses, enhanced bodies, internal interfaces) become more developed and prevalent in human’s lives. I want to educate and inform children about the possible ideological struggles, policy decisions, and augmentations they may encounter in the future.” 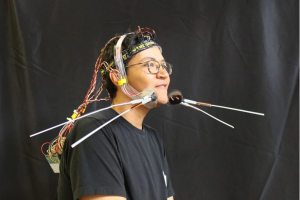 As a first-generation African American student, Chris initially felt isolated in his undergraduate studies but gradually made connections. “It’s pretty rare to find someone that you can relate completely with, whether that’s racially, socially, or economically, but you can build a support group of people who relate with certain parts of your identity, and I rely on those people heavily.” Grateful for all the support he has received, Chris pays it forward to the next generation by organizing NASA SUITS (Spacesuit User Interface Technologies for Students) outreach events and mentoring local STEM high school students as they prepare for college. “I am also an active participant in the McNair Scholarship program, which helps promising undergraduates from first-generation families or underrepresented groups to prepare for graduate-level research. It is my hope to one day reciprocate the opportunities I have gained from this program by serving as a role model to students from social and economic backgrounds similar to mine.”

Encouraged by faculty mentors to consider doctoral studies, Chris is currently pursuing a Ph.D. in Creative Technology & Design at the ATLAS Institute at CU Boulder. He advises undergraduate students considering research to contact graduate students and professors. “Now is not the time to be shy! If they don’t have any research positions available, they most likely know someone who does.”

–Written and edited by Ian Ludden

From Theory to Practice: Prototyping More Robust Termination Checking for the... Scroll to top